Price surge continues in 2022 as per CoreLogic’s January report 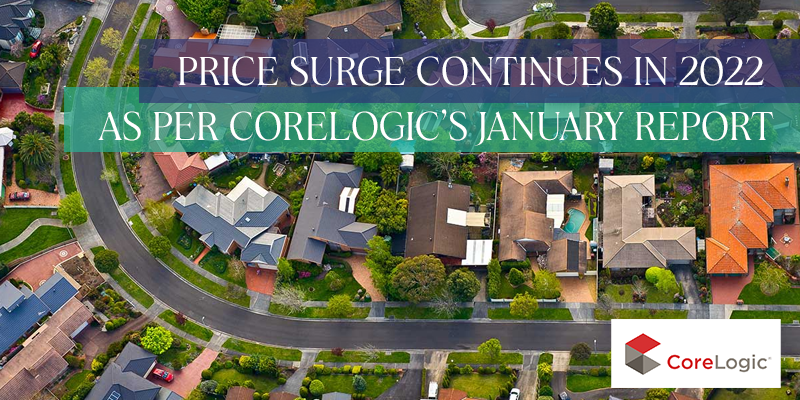 CoreLogic’s latest home value data shows property prices has increased by 22.4% over the past year, the biggest increase since June 1989. This has made an average Australian homeowner become $131,236 richer on paper over the past year. Furthermore, this makes Australians one of the wealthiest countries in the world with an average household wealth of over $1 million. However, this figure is greatly skewed towards those that own property. The wealth drops greatly for those that don’t.

The biggest part of property price increase had occurred in the first part of 2021 according to CoreLogics’ research director Tim Lawless. “The early indication is that housing markets are starting 2022 with a similar trend to what we saw through late last year. Values are still broadly rising. (in certain states)”, he said.
January this year has increases 1.1% and if maintained throughout the year, would still see a 13% – plus increase in prices annually. Mr Lawless said the future direction of the market would be in large part dependent on the selling intentions of current owners.

Melbourne is the only capital city where sales listings are currently slightly above their five-year average, while Sydney’s are 12% below. Melbourne and Sydney have seen inventory levels back to normal over recent months, taking some urgency out of the market as supply and demand become more evenly balanced.

Perth and Brisbane’s situation is very different though. “Supply remains tight and buyer competition is a key factor supporting the upwards pressure on prices.” Brisbane is a clear stand-out capital city for price increases over January (2.3%), with Brisbane also leading housing inflation over the past year (29.2%), Lawless said.

Perth is also a market for investors to watch with supply very low, forcing yields to rise and pushing vacancies to all-time lows.