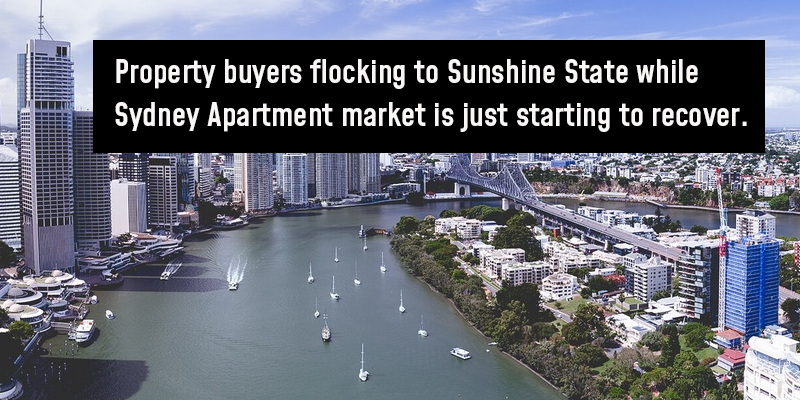 The Housing Industry of Australia (HIA) says Sydney’s apartment market is only just starting to recover after a significant loss in its migration record while Queensland has seen a promising record of its overall property market performance for the first time since 2007 as a result of interstate migrants flocking to the Sunshine State.

“It had been hard to choose which state performs well than the others with building activity continuing to boom across the nation”, economist Tom Devitt said. Interstate migration to Queensland has meant Sydney and Melbourne population is diminishing.

Although other states have also seen an increase in interstate migration but Queensland has topped the list with interstate migration up more than twice as compared to its average in the past decade. South Australia and Tasmania are also experiencing surge in building activities and rank second and third in volumes of interstate migration. Surprisingly, Western Australia is the biggest improver this year, moving from the bottom of the list into fifth in less than a year after the state’s exodus of residents reversed. On the other hand, Victoria had suffered significantly from the loss of overseas migrants, dipping to seventh position, with building approvals dropping more than 40 per cent below their decade averages.

Special thanks to our amazing clients this 2021! We could not have made it through this year without you! The team at Rogers Property Group is sending you warm greetings for the holiday, and the year will come. Thank you for trusting us with your property investment journey.Our office will be closed for Christmas holidays from 18th of Dec 2021 to 9th of January 2022. ... See MoreSee Less

If you were surprised by the property price growth in 2020, 2021 must have you absolutely shocked. REA Group reports, major capital cities in Australia have house prices increased by 22% and is recorded as the third fastest rate in Australian property market history. However, the housing boom is not done yet and is expected to feel its full force next year particularly some of Brisbane suburbs.

The new phenomenon of having a “bug-out” place – somewhere to retreat to in the case of emergencies, like COVID lockdowns – are likely to be uppermost in most investors’ minds over the next year - Domain AU ... See MoreSee Less

'Bugging out': The new property investment trend for 2022

There’s now a crossover between rental and owner-occupied property as investors look for retreats and ‘workstations’.
View on Facebook
· Share