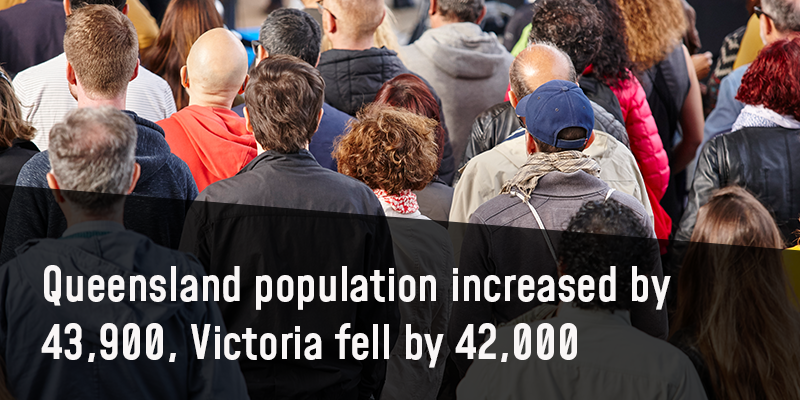 Latest reports show that while Victorian residents have been moving out the state at a rapid rate, Queensland’s interstate migrants however have increased significantly with a growing property market. According to Australian Bureau of Statistics (ABS), Queensland’s estimated resident population has increased by 43,900 over a year to March 2021. Victoria on the other hand, fell it’s population by 42,000.

Co-founder of BuyersBuyers, Pete Wargent said that this situation is already anticipated. “While state borders have not always been open, even by the end of March there was a significant swing in population away from Victoria, reversing the internal migration trends towards Victoria prevailing in recent years”. It is always likely that Queensland is the main state to benefit from Australians seeking escape from other State’s lockdowns through permanent relocation. In fact, in the past 18 months, Queensland is the only state that had relatively few restrictions, and when the opportunity has presented itself, residents from other States have headed the Sunshine State.

Doron Peleg, CEO of RiskWise Property Research said, “The main population growth hubs in Queensland are Greater Brisbane, Gold Coast, and Sunshine Coast, all of which have been busy locations in recent months.” As population increased, Brisbane’s rental vacancy rate has continued to slim down to below 1.5% along with Gold Coast and Sunshine Coast both have remarkably tight rental markets. Comparing it with the inner regions of Melbourne is a different story, with vacancy rates running at around 5 to 6%.

Amidst population increased and tightening of rental vacancy rate, housing market is also booming in Queensland. Property market in the region from Noosa to Tweed is growing and most of the buyer’s agents in the area are running at a very high capacity. Sourcing stock has been a challenge for many real estate agents and investment companies as properties are selling quickly particularly in the beachside market. Mr. Wargent also added that his team has been very active in suburban Brisbane, where investors are coming back into the market, seeking detached houses with solid yields, and the potential to add future value.