HomeAustralian Property MarketSave as much as $49,329 in 2 years as Westpac cuts variable rates to 1.99% 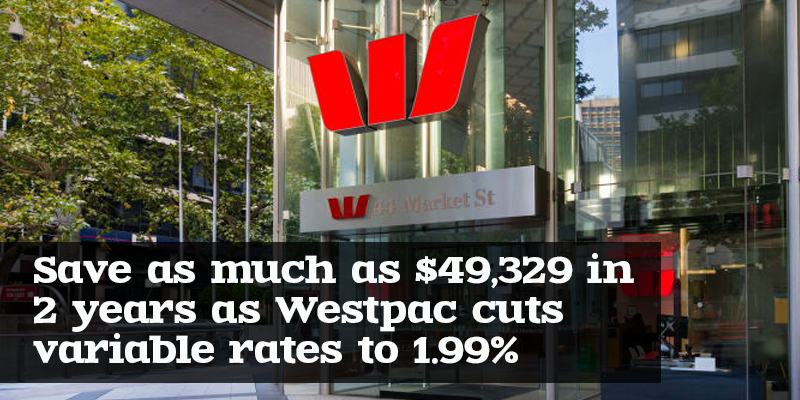 Westpac reduced the introductory rate on one of its variable home loans (Flexi First Option Home Loan) taking the rate down to 1.99% from the previous 2.19%. Although this offer is available on an introductory basic only, customers who switch from the average variable interest rate of 3.16% to this new offer could save as much as $49,329 over two years based on a $400,000 loan.

Westpac has become the first major bank to offer a variable loan below the symbolic 2% barrier. This offer applies in the first two years and reverts to 2.49% thereafter. Customers with a loan-to-value ratio (LVR) of at least 70% are encourage to grab this Westpac’s new rate offer that can help them save thousands of dollars especially in this current pandemic situation. Along with Westpac Group subsidiaries, George Bank, Bank of Melbourne and BankSA have also made similar changes cutting their variable rates from 2.44% down to 2.24%.

Westpac’s lowest offer in variable rate has made them the cheapest option among the Big Four Banks. Comparing the current variable interest rates, CBA and NAB are setting both at 2.69% while ANZ at 2.72%. While Westpac’s variable rates have lowered, its fixed rates however have gone in opposite direction bringing its 4-year interest rate up from 2.19% to 2.49% while the 5-year rates have also risen by 30 points.

In spite of these changes, Westpac remain the only Big Four bank with the cheapest 2-year rate at 1.89% while ANZ and CBA currently offering 1.94% and 1.99% respectively.