The bank will ‘take time’ before raising interest rates 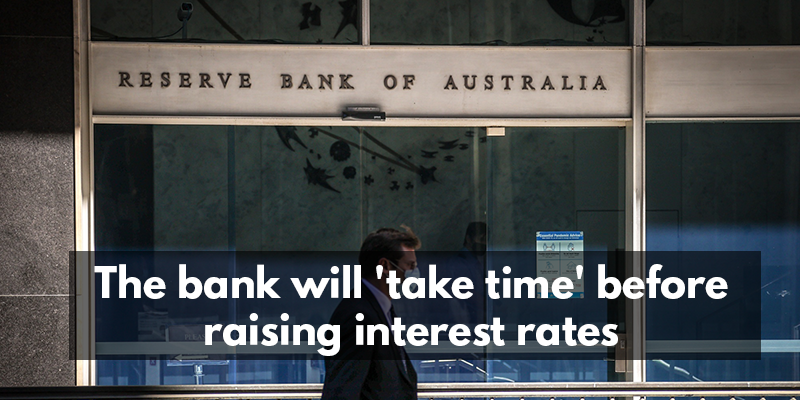 At its meeting last week, the RBA Board decided to keep the official interest rate on hold at 0.10%, despite inflation rising faster than its expectations. During their monthly meeting last Tuesday, the RBA board also agreed to end its quantitative easing program after its final bond purchases on February 10.

RBA Governor Philip Lowe emphasised again that this month’s end to the bank’s bond-buying program did not mean that an increase in the cash rate is imminent during the National Press Club lunch in Sydney. Lowe says policymakers are flying into uncharted economic territory, and the RBA will “take the time” to figure out what is going on before raising interest rates.

Philip Lowe said the Reserve Bank’s board would be “patient” before raising the key official interest rate for the first time since November 2010. In fact, Australia’s core inflation rate, although at its highest level in more than seven years, is still much lower than other countries that have already raised rates, such as the UK and New Zealand, or are about to, such as the US.

“If things go well, and the economy performs strongly, then there are clearly scenarios where we would be increasing rates later this year if some of the uncertainties are resolved,” he said in the question and answer session.

“Because inflation is not that high at the moment, we can wait to see how those uncertainties resolve. If they resolve in one way, then we’ll raise rates, if they resolve in another way it is still plausible that the first increase in interest rates is a year or longer away.”, says Dr Philip Lowe